A Journal of Applied Mechanics and Mathematics by DrD, #36

In a recent post (#35) I mentioned that I often participate in another forum called Physics Forums (PF). The problem that I want to discuss here is an elaboration on a problem that recently appeared at PF. I'm going to add a little bit of complexity to the problem (the problme as stated at PF was extremely simple) in order to make a particular point. 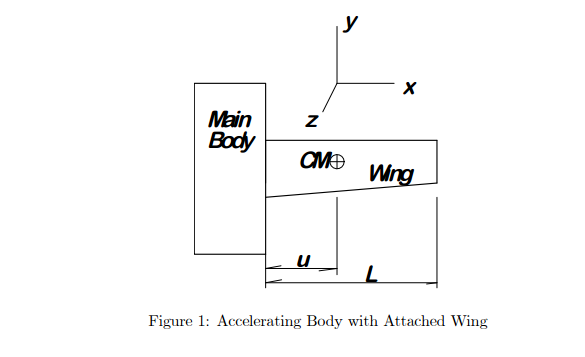 The system of interest is shown in Figure 1, a body with a single wing attached to one side. You might consider this to be one side of an airplane, or perhaps a stirring paddle used to mix paint. The mass of the wing is M, and the center of mass for the wing is at the point marked CM, a known distance u from the main body. We are told that the main body has an acceleration a sub z in the z-direction, and that the whole system is immersed in a viscous liquid such that the drag force is proportional to the square of the velocity in the z-direction. Our concern is with the connection between the wing and the main body. We need to determine the shear and bending moment on that connection due to z-direction motion.