Along with entrained air, cavitation is a top candidate for causing pump problems.

Cavitation occurs when the pump’s internal pressures are lower than the vapor pressure of the liquid which results in rapid vapor formation within the pump which collapse as the liquid is swept into the higher pressure regions of the pump. The cavitation effect may cause material damage to the impeller and possibly casing, which is resultant of the sudden formation and implosion of vapor bubbles.

The energy expended in accelerating the liquid to high velocity in filling the void left by the bubble is a loss, and causes the drop in head associated with cavitation. The loss in capacity is the result of pumping a mixture of vapor and liquid instead of liquid. Even a slight amount of cavitation will reduce the capacity significantly. Entrained air gets into a pump, the lower-pressure bubbles become larger. If an air bubble gets big enough to cover the impeller eye, the pump becomes airbound.

A generality to keep in mind when evaluating entrained air vs. cavitation is this:

2) With most traditional cavitation, the liquid coming into the pump is fully liquid. As soon as it hits the inlet of the pump, it starts to vaporize and comes out as liquid.

Only about 75 percent of cavitation creates pump noise but the material damage is always there. In cavitation, the pitting damage on the impeller.

Three rules of thumb for determining whether cavitation is causing pump performance problems:

1) Throttle the discharge and check the noise – Throttle back the pump on the discharge (not the suction) to lower the flow rate. If the pump noise goes away, it’s about an 80 percent probability that cavitation is the problem.

3) Cool the liquid and check for noise – If the process liquid is normally at 200°F and you cool it to 180°F and the pump noise goes away, it’s probably cavitation. 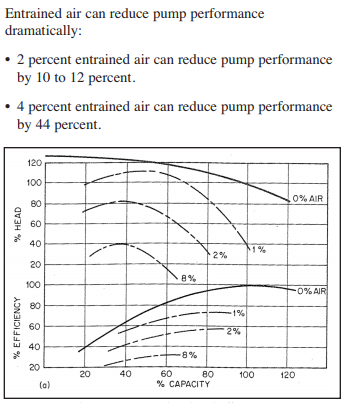