A warning by Dr. D. posted on this site reminded me of two funny incidents. Dr. D. was responding to the use of PPM for perpetual motion machine. These initials according to Dr. D. are used for Permanent Magnet Motor. This may sound trivial, but the following, I was not warned about in school.


If you have ever worked in big corporations especially defense or government related there are new languages you will need to learn. Shortly after joining a defense company, I told my boss if I did not get a company-to-English, English-to-company dictionary I was not going to get anything done. He handed me an 8-1/2 x 11” book about ½” thick, printed on both sides, each sheet having two columns. This was a list of Abbreviations, Acronyms, and Initialisms (A, A, & I). Many had multiple meanings.


A few years later at a NASA facility, I attended a seminar. Staff from all different departments and unrelated programs attended. Several of us arrived early and self-introductions led to conversations about each other’s work. The instructor was late so the conversations continued for perhaps 20 minutes. Two individuals in particular were having an intense conversation and speaking in acronyms. Most in the class were not listening to all the details because none of us had the local A, A, & I dictionary. As it turned out neither did this two individuals. After 20 minutes of speaking about a particular A, A, or I they realized each other’s A, A, or I was completely different and unrelated to the other. Yet until they realized it, you would have been convinced they were on the same topic. 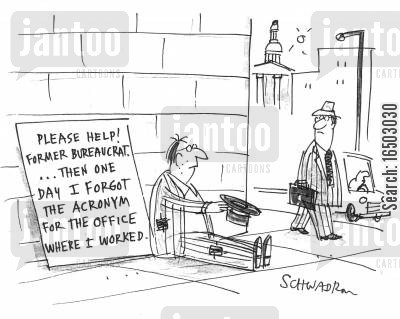