An article appeared in an engineering forum entitled Why Designs Fail. As I thought about the article and the examples presented, the Titanic, Tacoma Bridge, etc., I realized mitigating the consequences of a failure are more important than preventing the failure.

One of the subjects I did not learn in the classroom was Failure Mode and Effect Analysis (FMEA). I do not intend to cover the subject of FMEA but would like to emphasize one small portion. FMEA was introduced to me on my first job in the late 70's. One aspect of human nature needs to be over come when applying FMEA. Problems we do not expect to happen due to low probability, we tend to dismiss with no contingency if it occurs. FMEA forces you to separate probability from consequences.

During my FMEA training I was told to ask what happens if a particular failure were to occur, without arguing over the probability, which is addressed separately.  Most homes have smoke detectors and many have fire extinguishers. These items provide early warning and a method to stop or at least slow the progression of a fire until help arrives. Few homes have precautions for an asteroid strike though the results will be far worst with little mitigation possible.

A different state of mind comes into play when you accept the sinking of a ship as a possibility. Expecting to foresee all the possible ways it could happen may be impossible. How a ship could fill with water is irrelevant once it happens.

If the Titanic designers had asked themselves what would happen if the entire ship flooded, not worrying about the how, lives would have been saved. Perhaps the compartments would have been 100% isolated from each other or more lifeboats provided. 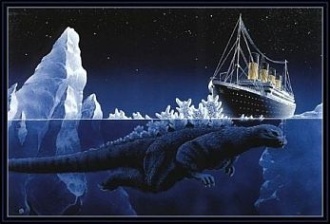