The stress at a given point is mathematically defined by nine values:

Stress is a tensor of second rank. The forces area thought to act on every one of the infinitesimal elements of area with different orientation, which can be imagined at one point. Only such forces are considered, which are locally in equilibrium with equal and opposite forces: Tensor is symmetrical. The stress across a plane through any given point located at the surface or inside of a rock can be resolved into two components:

, acting normal to the plane.

Shearing stress, or tangential stress, symbolized by Greek letter t, acting along the plane, perpendicular to the normal stress.

Shearing or Tangential stresses can be:

a) Dextral or Clockwise

Salvador Landeros reacted to this 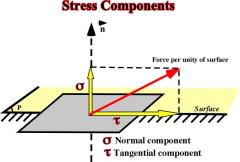