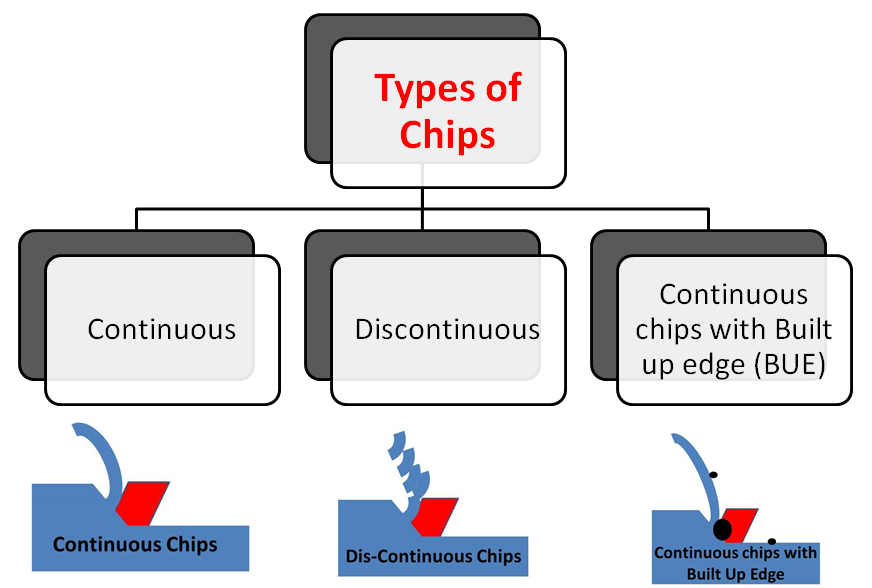 If the metal chips formed during machining is without segments i.e. without breakage, than it is called as continuous types of chips.
Continuous chips are formed when the ductile material is machined with high cutting speed and minimum friction between the chip and tool face.
The conditions which are responsible for the formation of continuous types of chips are
(i) Ductile material like mild steel is used.
(ii) Bigger rake angle of the tool.
(iii) High cutting speed.
(iv) Minimum friction between the chip and tool interface.
(v) Small depth of cut.

The formation of continuous chips during machining process has the following advantages
• Better surface finish to the ductile material.
• Less heat generation due to minimum friction between the tool face and chip.
• Low power consumption.
• Long tool life due to less wear and tear.

If the chips formed during machining process is not continuous i.e. formed with breakage is called discontinuous chips.
Discontinuous types of chips are formed when hard and brittle metals like brass, bronze and cast iron is machined.
Conditions which are responsible for the formation of discontinuous chips are:
(i) Low feed rate.
(ii) Small rake angle of the tool.
(iii) High cutting speed.
(iv) High friction forces at the chip tool interface.
(v) Too much depth of cut.

The formation of discontinuous types of chips in brittle materials provides good surface finish, increases the tool life and reduces the consumption of power.

When discontinuous chips are formed in the ductile materials, the workpiece result in poor surface finish and excessive wear and tear of the tool takes place.

3. Continuous Chips with Built Up Edge

Continuous chips with built up edge is formed by machining ductile material with high friction at the chip-tool interface.
It is similar to the continuous types of chips but it is of less smoothness due to the built up edge.

How Built Up Edge is Formed?

The making of the BUE has one advantage i.e. it protects the tool from getting damaged from high friction and temperature generated during machining process and hence the tool life increases.

The formation of these types of chips results in rough surface finish, change in the rake angle and cutting forces.

Comparison between Continuous, Discontinues and Continuous Chips with Built up Edge in Tabular Form are: