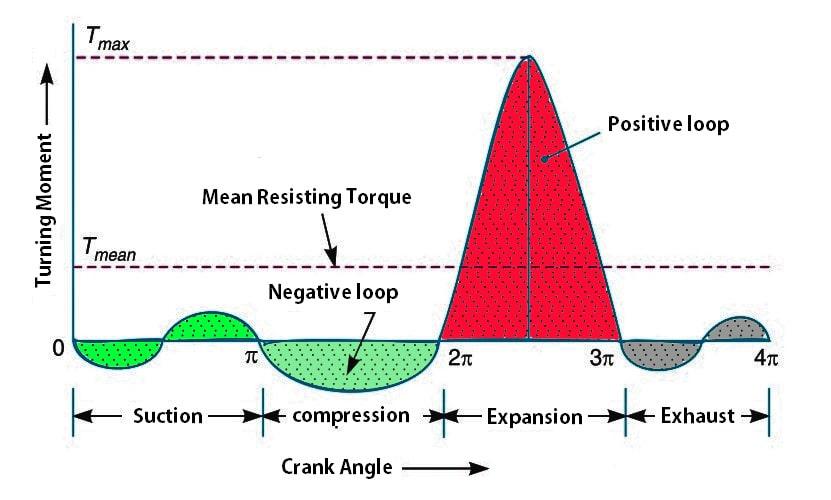 Following is the Turning_moment Diagram of a Four Stroke Internal-combustion Engine. As we already know that the four-stroke engine will have one power stroke (working stroke), for every two revolutions of the crank (720°). Turning Moment Diagram for a Four Stroke Engine Turning_Moment Diagram for a Four Stroke Engine During the suction stroke, the pressure inside the cylinder is less than the atmosphere, that is the reason for the negative slope in the suction region in the above graph. During the compression, the work is done on the gasses so it is also represented under the negative slope. Under the expansion/power stroke the fuel combustion will happen and the piston moves downward and produces some mechanical work on to the crank. This is work done by the gasses onto the piston. As shown above, there is a huge positive loop shown this area of the graph represents work done by the gasses. And further, the combustion particles will exhaust, during this stroke, the work is done on the exhaust gasses, therefore there is a negative slope represented. In the above graph, the effect of the inertia forces also considered. Since there are the positive loops present in the suction and the exhaust graph regions shown above. This is the turning_moment diagram for a Four Stroke Engine.